Sweetwater Tavern is located in the heart of Detroit’s historic district with roots that date back to the mid-1800s as one of the city’s first buildings. First as a hotel, then evolving with the city to become a restaurant and bar, Sweetwater has been known for its authentic homemade food for thirty years.

Sweetwater is within walking distance of the Renaissance Center, Hart Plaza, Ford Field and Comerica Park. Three shuttle buses provide free rides to all Tiger, Lion and Red Wing games, as well as major concert events. Come for the food stay for the friends, Sweetwater has accrued a reputation over 30 years for its distinctive, succulent taste — compelling chicken wings. Owner, Jeffrey Cain, mixing both southern and northern cooking experience, has developed secret recipes for wings, ribs and other Detroit favorites to a perfection of enticement and satisfaction. 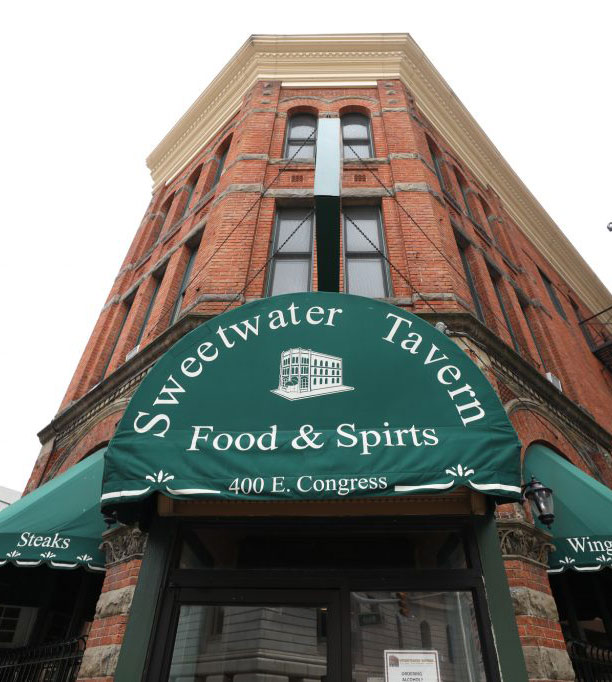 Jeff remembers his grandmother proclaiming the wings to be the best part of the chicken, and Sweetwater’s signature dish proves her right. The wings are delivered fresh each morning and marinated 24 hours in herbs and spices. Quite frankly, chicken wings are what Sweetwater does, and we do it well. The flavor is so unique that once you try Sweetwater wings we think you’ll be hooked for life.

Jeff has been in the restaurant business since his early teens working for his mother and father as a dishwasher, busboy, cook and bartender. Prior to Sweetwater, Jeff owned several places that dealt primarily with the entertainment end of the industry. After a seven year job at the Marriott Hotel in Detroit, Jeff purchased Sweetwater Tavern in May of 1991. Since then he has associated with Sweetwater so closely that the staff, many of whom have been with him since inception, are like a family along with many of his patrons.

Patrons include travelers, celebrities, high-level politicians; Detroiters from the east side, the west side, all around town as well as sports, convention or concert attendees. They come for the wings, the ribs, the other fine menu items, the viable atmosphere, the 11 fifty inch flat screens, and the assurance that they are the most important entity in the place.